When members of Long Island, N.Y., Local 25 learned of a museum being built to honor a local Navy SEAL hero, they were all in.

“Anytime somebody calls us to help out with any military or veteran causes, we’re always happy to help,” said Local 25 Business Manager Kevin Casey in a video on the project produced by the National Electrical Contractors Association.

The Lieutenant Michael P. Murphy Museum, located on the waterfront in West Sayville on the south shore of Long Island, has deep roots in the community. Murphy was from Long Island and died in Afghanistan on June 28, 2005. He and three other SEALs were conducting a reconnaissance mission high up in the mountains when they were spotted and then attacked by a force of more than 50 militia members. Murphy risked his own life when he moved out into the open to get a signal to call for help.

Despite being fired at, he made the connection, though it cost him his life. Only one person survived, fellow SEAL Marcus Luttrell, who went on to write a book about that fateful day that was eventually turned into the movie “Lone Survivor.” More Americans died that day than any other during Operation Enduring Freedom. It was also the single largest loss of life for Naval Special Warfare since World War II.

“In my house, Mike Murphy is a hero,” said Casey, whose son is currently serving in the Army in South Korea, and is a member of Local 25. Casey also has other family members in the military.

Between six and 10 Local 25 members worked on the project, doing all of the electrical work including power, lighting, fire and burglar alarms, and tele-data. Some members are even planning to volunteer to come in on weekends and work without pay. In addition to getting much of the material donated, NECA and Local 25 raised more than $75,000 for the project.

“I’ve run a lot of projects in my career. Those projects were just, ‘Hey, let’s put up another building.’ This project is so heartfelt,” said Mike Ferrante, director of maintenance for signatory B&G Electric in the NECA video.

The work on the 10,000 square foot space, which began in 2019, was halted because of the COVID-19 pandemic, but is expected to finish later this year. The museum is the first of its kind in the Northeast.

The Murphy museum project is an extension of Local 25’s ongoing work to support veterans. Casey says members have donated their time to restore a local Veterans of Foreign Wars hall and a veteran’s hospital in Northport. At the hospital, contractors paid for the lights which members installed for free.

Local 25 members recently worked on two field hospitals in Long Island to help with the demand for beds created by the coronavirus pandemic. 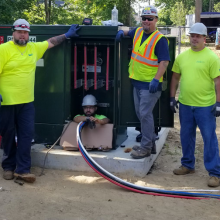